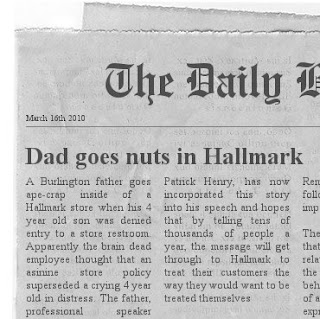 I used the “S” word in front of my children today.  Yes… the “S” word. The expletive of all expletives, and I said it in front of my babies.  I actually hadn’t even noticed that the word had passed my lips until my four year old admonished me in the car on the way home from the movie theatre. I admit it, I said it…. but that woman really was STUPID !!.
I had just taken my two boys to see The Tooth Fairy with Duane “The Rock” Johnson, and we stopped off at a Hallmark Store to buy a card for a friend who has just had a huge event happen in his life. I am typically not a card buyer, but this was a special occasion so I didn’t just want to pick one up from the grocery store, I wanted to go out of my way to buy from a specialist.
We walked into the Hallmark store and were directed to the Congratulations cards where I perused the various choices. My four year old began tugging on my coat and informed me that he had to use the bathroom…again. After being dragged out of the movie twice I was a little tired of his bathroom breaks so I told him to hold it. I chose a card and walked to the counter to pay. As I waited in line, I noticed that tears had formed in his eyes and realized that he really had to go so I asked the lady behind the counter where the restroom was.  She informed me that they didn’t have one.  You and I both know they have a restroom, so what she meant to say was they didn’t have one for customers. As my son began to cry, I looked at her with a “can you help me” look and she shrugged her shoulders with half hearted empathy and said, “It’s our policy”. I am not one to give customer service lessons at point of purchase, So I held my tongue (no small task) and left with my children.  It was on the way home that I was admonished for the “S” word.
We all have poor customer service stories that we enjoy telling when the conversation calls for it. The fact that I will never shop at the Hallmark Store in Alamance Crossings is no real “AHA” moment. As I contemplate my experience, I would have to say the lesson is this… Mess with me you lose my business. Mess with my kid you gain an enemy.  The sales woman at the Hallmark store in Alamance Crossing, Burlington, North Carolina 🙂 let policy override common sense and compassion. Had she chosen to ignore “policy” and helped my child and me she would have created a fan. Fans are loyal. Fans will go out of their way to spend money. Fans don’t shop alone.  She chose not to and as a result, not only destroyed a consumer relationship, she created an adversary who will take any and every opportunity to steer people away from her card store. He may even write an article about his experience that is distributed to hundreds of thousands of people.

Patrick Henry is a songwriter, author, and speaker, who shows clients how to create distinction in the market place and
blow away the competition with the four keys to becoming a “ROCKSTAR IN A ROOM FULL OF KARAOKE SINGERS”. Patrick’s entertaining programs show audiences what happens when Keynotes, Comedy, and Concerts Collide. For more information go to www.patrickhenryspeaker.com