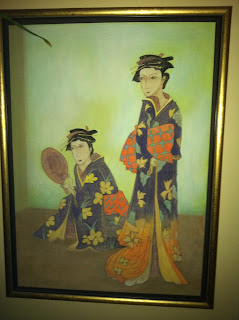 Staring at the painting of the two Japanese women hanging in my mother’s house, I realize that I have stared at that picture my whole life. I first remember it on a wall in my grandparents’ house beside the upright piano that my grandfather loved to play, especially after a scotch on the rocks had loosened his fingers. Surrounded by southwestern art, a shadow box of arrow heads, and a painting of a running mule deer, I didn’t understand how out of place the painting of the two Japanese women was. I just knew that it was always there and had come to represent the dependable, unchanging, stability that tends to only be found at your grandparents’ house.
As a child, I always knew that my grandfather had fought in World War II, but his service had been somewhat marginalized in my young mind by what I saw in old movies and what little he told me about his experience. To me, WWII was a bunch of white guys wearing green or khaki uniforms with shirts tucked in and hair perfectly combed with a part down the side.  I also presumed that most of it was fought in black and white. Like my hundreds of plastic army men, no-one actually got hurt and everyone got to go home for dinner. It wasn’t until I had left my teenage years behind that I actually learned the truth about World War II and the truth about the painting.
If you study the painting in my mothers house, you may think it is good. You may even think it is really good despite the simplicity of the subjects. How much would you pay for a good painting? two hundred dollars, five hundred dollars, a thousand dollars? If you were to compare it to a similar painting, you may decide that it  doesn’t measure up. You may even begin to notice the rudimentary flaws in the design, the unproportioned features of the subjects, and perhaps the fallability of the artist. You may decide that it isn’t worth a lot of money until you hear, as Paul Harvey used to say,”the rest of the story”.
My Grandfather was an engineer in the Army Air Corps during World War II. He built runways and buildings on Okinawa. One of his responsibilities was to oversee Japanese POWs. We have all heard the horror stories of how the American POWs in the South Pacific were treated. I’ve learned that, as a whole, Americans were much kinder and humane to POWs than their Japanese counterparts and my grandfather was no different. Although efficient and strict, he treated the POWs he supervised with kindness and respect. He allowed no ill treatment on his watch. As a matter of fact, because of the humane treatment that the Japanese POWs received under my grandfather, they viewed him with respect. I was told that the Japanese soldiers would put on theatrical productions and invite him and his officers to attend. They would clear the front row to provide them a place to sit. When my grandfather was due to return to the States, he bid farewell to many of the Japanese POWs that he had come to know, and in some cases like. It was then that he was unexpectedly presented with a gift.
You may look at the painting of the two Japanese women hanging on the wall in my mothers house and think it is good. You may even decide you would pay two hundred dollars, five hundred or even a thousand dollars for such a painting. The value of the painting, however, may change in your mind if you knew that in 1945, a Japanese prisoner of war painted two Japanese women on a United States Army issued bed sheet using paints that he made with materials that he found in and around an Okinawan POW camp. He would then present the painting to my grandfather as a token of appreciation for the kindness bestowed upon he and his comrades by their captor. How about now? A million dollars, two million? How much would someone pay for a painting with the history of the one on my mother’s wall ? That is a question that will never be answered because the painting will never be sold.
Beauty is in the eye of the beholder. Value is in the eye of the buyer. Long term relationships are created when value is provided. We routinely pay $4.00 for a cup of Starbucks Coffee, not because it tastes better than the coffee sold in the gas station or at McDonalds, but rather because of the context in which it is delivered. Why do people pay hundreds of dollars more for front row seats at a Broadway show or rock concert? CONTEXT! Creating an extraordinary customer experience is not simply about providing quality goods and services. It is about providing those goods and services within the context of:
1.     FRIENDSHIP– People will buy from friends first.
2.     TRUST– When your goal is to provide value rather than simply closing a sale then you establish trust.
3.     CONVENIENCE– Is it easy to do business with you? your customers will tell you.
4.     EMPATHY–  People want to buy from those who genuinely care about their  challenges and problems. When you care, you become a guide to the solution.
Whether you are in sales, management, education or an entrepreneur, the product, service, or message that we provide, is only as powerful as the person behind the product and the context in which it is delivered.
Posted in customer loyalty, customer service, managing change, north carolina speaker, peak performance, personal development, professional speaker, prosperity